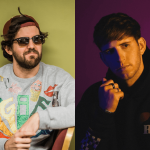 After many rumors, Dillon Francis finally unveiled his unpublished collaboration with ILLENIUM.

We talked about it in February (READ HERE).

A few days ago, Dillon Francis used his social networks to unveil his long-awaited collaboration with the American superstar. Dillon played a second of the track to allow his fans to listen to it.

Calvin Harris and Dua Lipa together again in “Potion”

#Premiere | Kx5 the new alias by Kaskade and Deadmau5