Last week something strange and unheard of happened among the most prominent DJs of the Hardstyle genre. Headhunterz and Da Tweekaz, a fight and complaining about a small copyright problem.

Da Tweekaz made streaming called “Tweeka TV Marathon” – Episode 22, which consisted of a 12-hour broadcast on YouTube, an event that included important guests from the hardstyle and hardcore scene. The crucial point of the matter was when one of the guestsmixer, Sound Rush, played the song Dragonborn part 3 and after part of the track was played, Marcus stops the song and the transmission falls by Copyright of this song by Headhunterz. After a few hours of livestreaming, Da Tweekaz posts an image on Instagram stories indicating that in 12hrs of transmission, the only song that has copyright blocking notification is the Headhunterz song.

Moments later, on Instagram, Headhunterz responded with the phrase “Karma is a bitch”, hinting that perhaps they made fun of their song.

However, many users bombarded Headhunterz to remove this block, to which the next day, he responded in his stories with the following message:

Guys, to clarify, I have nothing against Da Tweekaz, nothing. I mean I really respect what they do. Only in the tone of voice that they said yesterday on the stream … it was not an attack or anything but it caught my attention, but I died of laughter when my track blocked their transmission and I really did not do it, but Right now I also don’t feel the need to take that copyright lock so, sorry to you guys.

Finally, due to this copyright issue, the stream could not be re-uploaded, because it violated the rules of the YouTube platform, but a few days ago it was fixed. This led to an impressive meme battle over the weekend, in fact, Da Tweekaz has clarified that they always make jokes to their guests and other artists and that there are obviously no hard feelings about it and here I start the fight between Da Tweekaz and Headhunterz with many memes. 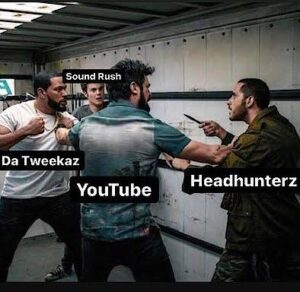 Among so much joke and humor that was generated in the Insta-Fight, they took some time to make a “cover” or “remix” of the song in question, “Dragonborn Part 3” in a way too different to avoid the claim for copyright

Insta-fights mostly generate a lot of controversy, laughter, and interaction. All to make a guestmix where the guest was: Headhunterz. A very good marketing strategy to capture the attention of the fans and give the pleasure of making a very special episode.

And well, finally, everything had a happy ending, since it seems that both signed the peace when it was announced that the stream could now be uploaded to YouTube.

Alesso: 'Together Again' to be held in Los Angeles

Ultra Music Festival 2022 is back to Bayfront Park!